Sign up for premium membership and get access to our best crocheting videos and projects. Learn new crocheting techniques and tips from our friendly experts. Anytime. Anywhere.
Monthly $6.00
Annually $49.00

Upgrade to GOLD membership and get unlimited access to our entire library of premium crocheting videos, receive discounts on video downloads and classes in the shop. In addition, you’ll receive five full-length classes, ten downloadable patterns, access to GOLD member LIVE events, and so much more!
Annually $129.00

Delicate and colorful, the African Flower Motif is a popular hexagonal motif that can make cute, crocheted toys, blankets and more. Crochet expert Mary Beth Temple explores this beautiful stitch pattern and shows you just how fun and easy it is to make in this video.

The motif is commonly worked in four colors, which is what Mary Beth demonstrates in this lesson. It’s a great use of leftover yarn and can be made in any color combination you like. Mary Beth works the African Flower Motif following these instructions:

With Color A, ch 4. Join into a ring with sl st in first ch.

You Might Also Enjoy...
Get new lessons
& special offers! 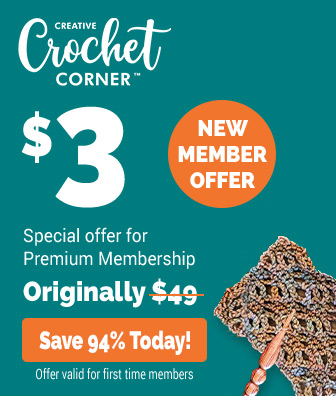